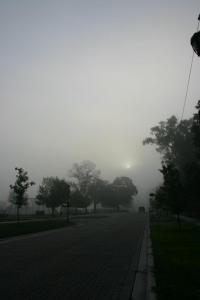 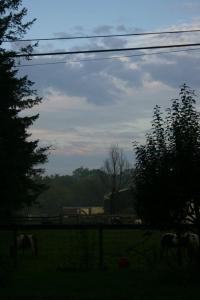 Some people are really good at that “finding the silver lining” thing. Annoyingly good, some of them. As in, you just want to whack them upside the head occasionally to give them something to complain about. But they would probably thwart you in that, too, and just come up with some cheery reason they needed to be whacked and how it gave them great perspective on what it feels like to be whacked or some such drivel that makes you feel guilty and annoyed simultaneously.

Anyway, I want to see how good you all are at it. No, I won’t whack anyone. Really, I promise. I want to know what you can come up with as the positive spin to put on things we normally don’t give a positive association to.

For instance, getting up early is not a positive thing for me. When I married 25 years ago I gave my husband two rules. No discussing gross anatomy class at the dinner table. And NO talking to me for the first hour after I wake up. This was for his own safety, believe me. So, I’m not a morning person.

Nevertheless, I do get up each day to get child #3 to school by seven. And the fall is when I realize that it has some great perks. Like the photo above. The streetlights are still on for a bit, while the sun begins its pink and yellow ascent over our cobbelstone street through town. It’s a sight, every day, that never gets old. Then, if we’re lucky, the fog sits over the river or the nearly lake. It looks so soft, like it also knows not to be too harsh on me too early. It’s a beautifully gentle way to ease into a day. Plus, I have a thing about driving into fog. I actually love it.

So, I’d like to know what the silver lining would be in this situation for you. What makes getting up early worthwhile?

Next in my scripture for enneagram series—my husband and youngest daughter are 6’s. I, who tend to rush into my next great idea or new place, am so at a loss to understand the 6 need to know everything before doing or deciding. But these two ground me before I run off to do something only partly thought through. We make a good team, we 5’s and 6’s. Here’s God’s word for your security needs, all you like them. #enneagram #enneagram6 #fear #fearless #bibleverse
%d bloggers like this: